“To the Europeans, South America is a man with a mustache, a guitar, and a gun,” the doctor said, laughing over his newspaper. “They don’t understand the problem.”

By the time you read this, I will be heading to the airport for my first trip to South America. I previously covered a Chilean book, but it seemed fitting to read the most celebrated author of my next country: Colombia’s Gabriel García Márquez. In another shift, this is the first short story collection I’ve read for the blog. My oldest friend gave me the book for my birthday after she enjoyed it and because of my upcoming trip. The full title is “No One Writes to the Colonel and Other Stories”, and we’ll get into the title more later. The collection was originally published in Colombia in Spanish as El Coronel No Tiene Quien Le Escriba in 1961.

I’m sure many of you are Western readers, and thoughts of Colombia, if you don’t think of One Hundred Years of Solitude, go straight to Narcos. So why am I visiting? Well, it’s been over 20 years since the events of Narcos, I wanted to visit a new continent on my annual trip, and the costs were very, very low. (Don’t worry Dad, I’ll still be safe!)

Spoiler: While these stories are not in a straight chronological order, there are some references that are revisited in later stories. As well, unlike most of García Márquez’s works, there is only one small instance of magical realism in these stories. The majority of the tales are simply regular people in small towns, struggling and living their lives.

Gabriel García Márquez was born in the northern Colombian town of Aractaca, between the mountains and the Caribbean sea, in 1927. Most relevant for today’s blog, he was raised by his maternal grandparents—his grandfather was a retired colonel who never received his pension from the government. He started his professional career working with local newspapers, and he would later reside in France, Mexico, and Spain.

García Márquez considered the novella his best work and said he had to write One Hundred Years of Solitude so that people would read No One Writes to the Colonel. In 1982, he won the Nobel Prize for literature with nearly 30 books to his name. When he died in 2014, the Colombian President declared him the “greatest Colombian who ever lived.”

The translation train is continuing back to South America. J.S. Bernstein is a well-known Spanish language translator, despite the paucity of information available about him online.

Overall, this was one of the smoothest and most evocative translations I’ve ever read. García Márquez is lauded for his fine-tuned use of language and descriptions and all of that carried over into the English version. I’ve been struggling through 3 months of DuoLingo lessons ahead of my Colombia trip, but I still had a feel for the beautiful flow of Español from reading this book. So many things sound better in a Latin language, right?

The relationships. García Márquez is very good at using the precise amount of words, without going into needless detail. The first story’s titular colonel has been waiting decades for the pension promised to him by the government after fighting in a revolution, The Thousand Days’ War. In the meantime, he’s raised and lost a son, with his long-suffering wife at his side. In “Montiel’s Widow”, we are treated to the comparison of a public and private persona.

“What’s the matter?”
“Nothing,” the woman said. He had the impression that this time it had been her turn to lie.

The colonel acknowledged that forty years of shared living, of shared hunger, of shared suffering, had not been enough for him to come to know his wife. He felt that something had also grown old in their love.

After the burial, the only thing which seemed incredible to everyone except his widow was that José Montiel had died a natural death. While everyone had been hoping he would be shot in the back in an ambush, his widow was certain she would see him die an old man in his bed, having confessed, and painlessly, like a modern-day saint.

The personalities. In a similar vein, the author is able to convey a character’s attitude and history in just a single sentence. Especially since most of the characters are not named, we have to rely on these sparse but succinct descriptions to flavor the stories.

She bore the conscientious serenity of someone accustomed to poverty.

Three months before, when he had turned twenty, the line of his mustache, cared for not only with a secret sense of sacrifice but also with a certain tenderness, had added a touch of maturity to his pockmarked face.

THERE ARE NO THIEVES IN THIS TOWN

She was sincere, that fragile woman, lacerated by superstition, married at twenty by her parents’ will to the only suitor they had allowed her to see at less than thirty feet; she had never been in direct contact with reality.

The visualization. I’ve never been very good at mental pictures or even having clear and colorful dreams. And yet, I still read. I wish I had discovered García Márquez sooner because he has a gift for crafting simple and easily pictured scenes. As well, since this collection was about regular people just living their lives, I was able to identify with a lot of the situations.

The alcohol was leaving him, in concentric waves, and he assumed once more the weight, the volume, and the responsibility of his limbs.

THERE ARE NO THIEVES IN THIS TOWN

He had spent so much that he had had to leave his watch in pawn, with the promise to pay the next day. A moment later, spread-eagled in the street, he realized that his shoes were being taken off, but he didn’t want to abandon the happiest dream of his life. The women who passed on their way to five o’clock Mass didn’t dare look at him, thinking he was dead.

She planted herself with discrete solemnity two steps inside the door and, leaning on the long ornate handle of her parasol, said: “I have to register a complaint.”

ONE DAY AFTER SATURDAY

The tone. García Márquez was well-known as a political activist and he lived most of his live in near-exile. Throughout each of the stories he weaves in a narrator looking upon the characters with a sardonic and gently judgmental eye. At the same time, there were causes and people the narrator obviously favored and they were given a gentler treatment. I liked the gentle use of language that brought out this tone.

Always the same story. Each time the colonel listened to him, he felt a mute resentment. “This is not charity,” he said. “It’s not a question of doing us a favor. We broke our backs to save the Republic.”

They didn’t wish to return either. “This [Paris] is civilization,” they would say. “There, on the other hand, it’s not a good atmosphere for us. It’s impossible to live in a country so savage that people are killed for political reasons.”

Big Mama’s matriarchal rigidity had surrounded her fortune and her name with a sacramental fence, within with uncles married the daughters of their nieces, and the cousins married their aunts, and brothers their sisters-in-law; until an intricate mesh of consanguinity was formed, which turned procreation into a vicious circle.

Along with the right to continue the exploitation of the rented land, and to receive the tithes and first fruits and all sorts of extraordinary donations, the heirs received a chart kept up from generation to generation, and perfected by each generation, which facilitated the finding of the buried treasure.

What I could do without:

This novella was not perfect, but it was so beautifully written and broken up into interesting chunks that I cannot think of anything I disliked. It definitely made me want to read a full García Márquez novel!

To fill space these are my favorite of the stories: There Are No Thieves in THIS Town or Balthazar’s Marvelous Afternoon. They both had darkly humorous levels of absurdity and foolishness.

I mentioned earlier that I don’t read many short story collections, but even after writing this blog I want to change that. A well-curated collection can tell a larger story and build subtle commentary on a theme in a way that novels cannot. Usually, I read fantasy collections around a theme, but this whole blog has been about challenging my reading! One last note, the titular story, “No One Writes to the Colonel”, was made into the above 1999 film by Mexican director Arturo Ripstein, and starred Salma Hayek as Julia.

I gave this 4/5* on Amazon. Stay tuned to see how much Colombia has changed when I return in September! Which García Márquez book should I read next? Let me know in the comments! 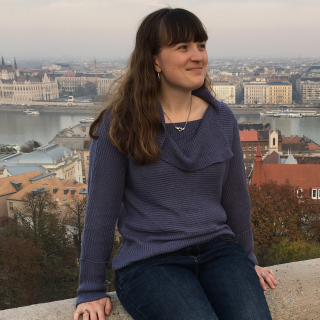 Reader by birth, traveler by choice and writer by trade. I'm proud of my roots, yet even more excited by the adventure on the horizon. When my nose isn't in a book, it's sniffing fresh cookies or being licked by my puppy. Often cold, frequently snarky and deeply curious, I'm just a small part of this big world.